Lfe has been hectic as always. Hubby's mum has moved into a nursing home in Bathurst so she can be closer to him. We are in the final stages of selling her home. Im in Sydney twice this week, one for an event and another to clean the house as the movers shifted everything this week and all that is left is to hand the keys in.

I have seven appointments this week due to kids and Miss 16 and I head to Orange Hospital a week today to finally get her tonsils out. Its a been a long drawn out process.
I haven't done any sewing since Bathurst Bloggers. I did do the binding on a quilt I made at Baradine and posted it to my daughter in Perth. Her first quilt from Mummy lol. I have made the grandsons two each but me eldest daughter finally has her own quilt to snuggle with on the lounge/bed. She has been using Mstr 10's Noahs Ark quilt I made him when he was a baby. She loves that it isnt heavily quilted'.

So what have I been doing, well...we had a guest from Lightning Ridge for a week which always throws out routines. I've been to one sewing day in the last 6 weeks could be longer ..."

Most days after the night routine has been done, I sit and  cross stitch. Its mindless like English paper piecing, which I also need to get back too. Yesterday the kids had counselling so I was able to finish my last fox on Fox Few by Plum Street Samplers 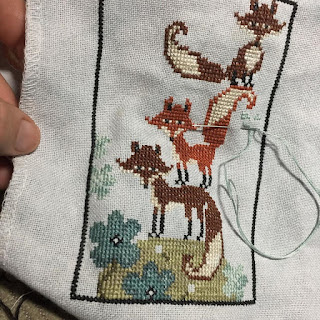 I have a few scattered flowers to do then I will make it into a little dough bowl cushion. Note to self, buy a dough bowl lol. There are a few animals in this series sheep, goats, llamas, pigs, chickens and a few others but I'm going to start the one with sloths...they look soo cute hanging from their branches. Not sure when I will start those as I'm hoping to do some Christmas decorations for myself and some for presents this year. But as usual, time is running out, If you would like to check out the series you can visit my website.

And to all my friends affected by the fires, stay safe xxxxxx